The Virginia Natural Landscape Assessment (VaNLA), a component of Virginia ConservationVision, is a landscape-scale, geospatial analysis for identifying, prioritizing, and connecting natural lands.  The analysis was piloted in 2004 in the Virginia Coastal Zone, expanded to a statewide model in 2007, and recently updated in 2017.  All versions to date were based upon land cover data derived from satellite imagery, however, another update is underway using high-resolution (1 meter) land cover data developed by the Virginia Geographic Information Network from 4-band orthophotography of the Virginia Base Mapping Program. 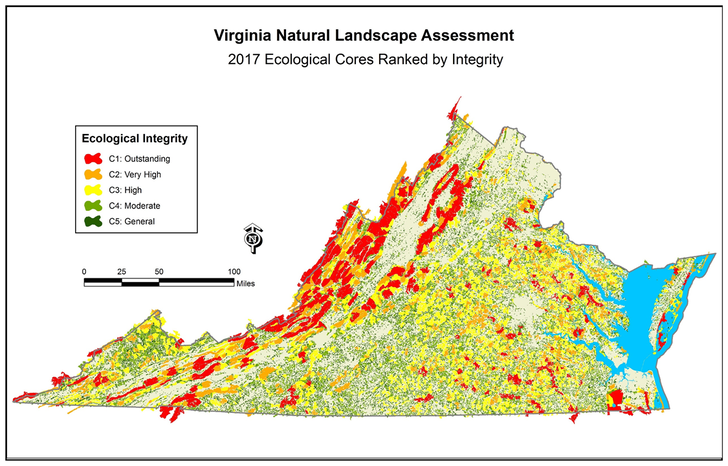 The VaNLA uses land cover data to identify continuous natural habitats called Ecological Cores, which are large patches of natural land with at least 100 acres of interior cover.  Interior cover begins 100 meters inward from edges caused by fragmenting features, such as a roads or utility corridors, and the edge zones are added to the interior areas to create Ecological Cores.  Smaller features called Habitat Fragments, with 10 to 99 acres of interior cover, are included because they support other VaNLA features and because they are important in localities with few large patches of natural land.  The predominant cover in Ecological Cores statewide is forest, but marshes, beaches, and dunes are significant components where they are abundant and meet minimum size requirements.  Ecological Cores are ranked by integrity to reflect the wide range of important benefits and ecosystem services they provide, including biodiversity conservation, wildlife habitat, aesthetic values, recreational opportunities, and protections for air and water quality.

Ecological Cores are connected by Landscape Corridors to create a statewide network of the highest priority lands, known as the Natural Lands Network, and are aggregated along with contiguous natural cover into larger planning units called Natural Landscape Blocks.  Also identified are major corridors that could be conserved to maintain connectivity for westward, northward, and up-elevation movements of species populations escaping rising sea levels and warming temperatures.